The United States has the largest prison population in the world.  There have been various attempts over the years to change sentencing and get rid of mandatory minimums for non-violent offenses, but even that hasn’t been able to resolve this concerning trend. In fact, new attorney general has issued orders to all federal prosecutors to charge all offenses to the highest level possible and go for mandatory minimums whenever possible. This is of course good business for the companies that run many of our nations prisons, so at least for now, this numbers are expected to increase. 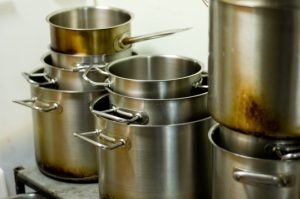 A recent news article from Food Tank, self-described think tank for food, lists the current incarceration rate at 66 prisoners per 10,000 U.S. citizens.  This is an astounding number when you look at virtually every other nation in the world. One of the major issues faced by these prisoners is that when prisoners are released, many employers will not hire them, because they have a criminal record. If you are a convicted felon, especially, it is very difficult to find work.  While there are valid reasons some businesses would not want to hire a convicted felon, that makes it very hard on these recently released parolees and probationers.  This is also a problem for society, as lack of employment leads to many committing more crimes in many cases, and that is why they say we have a revolving door in our prison system.

One industry that has a history of hiring convicted felons is the restaurant industry.  If you go into any restaurant in the nation, whether we are talking about a fast food establishment or a fancy restaurant owned by a celebrity chef, there is a very good chance you will find at least one, and probably more, workers in the kitchen with a criminal record.

As discussed in the article, many restaurants in our area are taking part in initiatives to recruit and train those released from prison as part of the reentry process.  This helps the workers, and it helps the businesses. They can work with halfway houses to get workers who are looking for ways to leave the property, and the main reason for that is if they have job.

However, as our Los Angeles employment lawyers can explain, while many employers are doing whatever they can to treat their employees with respect, some are not so willing.  If an employer knows their employee is depending on their job to keep their parole officer happy, they may take advantage of that employee.  This is not only unfortunate, but is a violation of the California labor code, and it does happen on a somewhat regular basis.

This can include withholding overtime and other benefits that are rightfully owed, creating a hostile work environment, employment discrimination and many other violations of state and federal law. If you are a victim of this, you should not be afraid to speak with an experienced labor lawyer. The meeting will be entirely confidential, and your employer will not find out unless you decide to pursue the matter.  If your employer retaliates at that point, that would also be a violation and part of your lawsuit.

California is the Center of the Second-Chance Career Movement, June 12, 2017, By Sam Drzymala, Food Tank