The NFL has been under scrutiny for failing to take action against players charged with violent offense, as well as additional wage and hour claims. According to the L.A. Times, the NFL settled a claim with Oakland Raiders cheerleaders for $1.25 million. The settlement is intended to cover back pay to as many as 90 former cheerleaders. The settlement is still awaiting approval from a judge. Cheerleaders who played on the team between 2010 and 2013 can recover $2,500 in back pay for the 2013 season and $6,000 for each of the other three seasons. 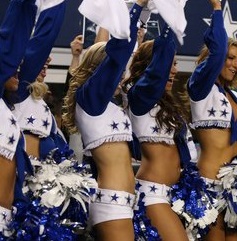 The lawsuit was filed against the Raiders in January, alleging that the NFL and team owners violated California labor laws by withholding salaries until the end of the season. This pay arrangement forced the cheerleaders to pay for their own employment related expenses and resulting in below minimum pay rates. The salary of $1,250 was equal to less than $5 per hour, according to the complaint. Our Orange Count wage and hour law attorneys represent employees throughout California who have suffered from an employment law violation. We represent employees in cases involving wage theft, discrimination, sexual harassment and contract disputes.

According to reports, the Raiders announced that cheerleaders would be paid the minimum wage for the 2014-2015 season. The team and the NFL also agreed to ensure that their practices were in line with California minimum wage laws. Rather than being paid at the end of the season, the Raiders have agreed to pay their cheerleaders on a bi-weekly basis. The cheerleaders will also make overtime when they are mandated to show up for celebrity appearances and other events that were once required without pay.

The Raiders are not the only professional sports team facing wage and hour disputes involving former cheerleaders. Other teams facing wage theft lawsuits include the Tampa Bay Buccaneers, the Cincinnati Bengals, the New York Jets, and the Buffalo Bills. Other teams, including the New York Giants and the Marlins have settled other wage and hour disputes with interns and office employees. Since these two lawsuits were settled, two more teams, the Orioles and Oakland Athletics, are under investigation. Due to the popularity of working with sports teams and unreported violations, many of these teams have committed serious wage theft for decades.

The settlement between the Raiders and former cheerleaders occurred the same day that fast food workers protested for higher wages nationwide. It is not just the professional sports industry, but also the media and service industries, where employees are at a high risk of wage theft. According to recent reports, employees may face even more problems that they did in the past. Wage theft claims rose 400 percent between 2000 and 2011. According to another Fair Labor and Standards Act, over 68% of low-wage workers will experience some form of wage theft during their employment. Victims of wage theft should consult with an experienced advocate as soon as possible. An employment wage and hour attorney can review the facts of your case, identify a proper course of action, and aggressively defend your rights to back pay and lost wages.