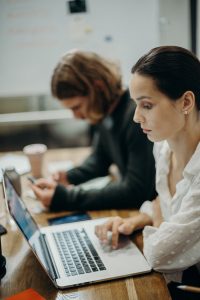 Referred to as the “digital equivalent of an eye roll,” it might seem harmless with strangers online or even across the Thanksgiving dinner table, but it can pretty quickly cease to be a joke and start being a real problem in the workplace. And it’s not that even employment attorneys can’t take a joke, but the fact is it’s been more than 50 years since the passage of the Age Discrimination and Employment Act of 1967 and still 6 in 10 older workers say they have experienced age discrimination at work.

Repeated use of this phrase could amount to creation of a hostile work environment for older workers, and employers need to take this seriously. Most workers understand that use of dismissive and/or derogatory comments on the basis of race, religion, gender, disability, sexual orientation or national origin aren’t appropriate. But such comments made on the basis of age can be just as damaging, from a legal standpoint. Issues are probably most likely to arise if a supervisor says it to/around a subordinate over 40, who is then subsequently demoted, transferred or fired.

Employers should likely consider reminding their workers that this kind of age-related phrase disparaging older workers can be costly not only for individual employees (discipline or their job) but the company (in the form of a lawsuit).

It should be noted that the oldest of Millennials will start turning 40 in 2021. For now though, federal law doesn’t extend age discrimination protections to younger workers. Older employees referring to younger workers as “snowflakes” likely won’t result in an age discrimination case on the basis of a hostile work environment (hostile – and unproductive – though it might be).