Last year, after 21 construction workers on site for five months at a new 79-unit apartment complex in downtown Berkeley were denied payments for five full months of work, local trade unions filed complaints with the state and local joint task forces. An investigation prompted the state labor commissioner to impose a contractor lien for $60,000, which was the outstanding balance of what workers were owed months later, long after the job ended. 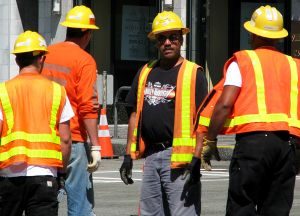 That turned out to mean those workers were actually paid – albeit late – for the work they did. However, as Next City reports, that is pretty minuscule compared to the scope of the bigger issue, which is unscrupulous contractors committing California wage theft.

Construction workers in particular are the second-most vulnerable labor pool when it comes to wage theft violations in California, just behind restaurant workers. The problem is vastly under-reported. Only a fraction of wage theft violations result in claims and judgments and a smaller number of those judgments are actually paid. It’s important that attorneys taking on these cases first help victimized workers explore the viability of the claim before pursuing it.

Following this incident in Berkeley, the city is now moving to do something more about this problem. The city is working to empower local officials to enforce wage theft sanctions by passing a local wage theft ordinance aimed specifically at ensuring construction workers are properly paid.

The new law prohibits construction contractors from obtaining permits of occupancy for structures if they are unable to spell out specifically how they are going to pay their workers. Then, the city will create a department that will initiate audits of these firms. Every month that the construction firm conducts work more than $100,000, the company will need to submit an update to city officials that outlines updated pay and benefit arrangements with the employees. Then, 10 days after completion of the project, the contractor has to turn over to the city a list of all subcontractors who were employed on the project – as well as those contractors’ state contract license numbers – and indicate how much work they did and how much they were paid.

If every city did this or if the state would initiate some similar legislation, it would likely cut down significantly on the California wage theft that takes place each year, costing state taxpayers $8.5 billion annually just in Social Security and other payroll taxes.

Other cities that have taken similar measures include San Jose, New Brunswick and Newark, NJ and Chelsea, Mass. In those locations, however, success has been somewhat spotty because, workers report, enforcement has not been strong or consistent.

In Los Angeles, the city recently opened an Office of Wage Standards, with the goal of reducing wage theft of non-government workers by hiring advocates to conduct educational sessions with worker and employers to discuss the rights of wage earners.

Had the Berkeley ordinance been in place last year, officials say the apartment complex wouldn’t have been able to begin taking rental applications before those workers were paid.