A public transportation worker in Washington D.C. is suing the agency for damages in excess of $200,000 after she claims her supervisor repeatedly asked her for, demanded or forced hugs. Eventually, she said, when she reported the sexual harassment, her boss retaliated against her. 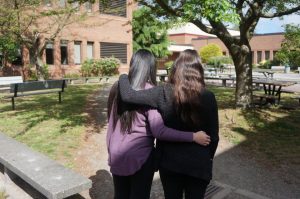 The federal employment lawsuit alleges her supervisors ignored repeated reports of this treatment, even as another assistant superintendent in the bus division where plaintiff worked revealed he had a history of sexual harassment at the firm.

This case presents a good opportunity to talk about the H-word: Hugs. For some, hugs are viewed as a way to “spread the love.” But our sexual harassment lawyers know they can also be a liability to workplaces that allow them to go unchecked.

Hugging can sometimes be a welcome gesture in the workforce after a particularly long day or a trying shift. But some things that need to be considered:

For these reasons, if there is any kind of doubt about whether a hug is welcome or appropriate, it’s best to refrain. Hugging absolutely can be construed as a form of sexual harassment, which is defined by the Equal Employment Opportunity Commission (EEOC) as unwanted or unwelcome sexual advances, requests for sexual favors or “other verbal or physical harassment of a sexual nature.”

In the Washington D.C. case, the woman first rejected the supervisor’s request for a hug in December 2013, when she told him she was married to another employee at the service named Antawan. He reportedly said at the time, “Ain’t nobody thinking ’bout no Antawan.” In the months that followed, the supervisor reportedly made several more requests for hugs from the employee, numerous times referencing her husband by name and telling her to “hurry up before (he) comes.”

A complaint was filed against the agency by the EEOC in late summer 2014. The claim included a number of other statements reportedly made by this supervisor and overheard by plaintiff’s co-workers. For example, when one co-worker indicated an employee had suggested her husband for an open position, the supervisor reportedly told her “Hell no” and that he was “tired of this husband and wife bull***.”

After plaintiff filed a complaint with management and then the EEOC, she was passed over for a choice job assignment, with her new supervisor telling her that if she couldn’t handle the stress of harassment, “maybe this isn’t the job for you.”