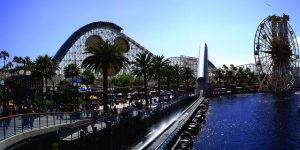 Park representatives said this will be one of the highest entry minimum wages in the country, beating the scheduled gradual increase of minimum wage in Los Angeles and the state of California. Minimum wage in L.A. is currently $13.25 per hour for businesses with more than 25 employees and is scheduled to hit $15 per hour in 2020. California is scheduled to reach $15 in 2022.Concurrently, union workers also pushed for a November ballot measure in Anaheim that would raise minimum wage to $15 an hour for workers at hospitality businesses that accept a tax subsidy from the city. In addition, hourly pay would go up an extra $1 per hour per year through 2022. At this rate, minimum wage would be $18 an hour by 2022. This would sweeten the pot quite a bit for the Disneyland workers who just received raises, and would help Disneyland employees not covered by union contracts, as well as hospitality employees throughout the city, including those would be working at two luxury hotels underway in the area. Among those standing in opposition of the ballot initiative is Disneyland itself. Disney has also been accused of dangling a promised $1,000 bonus as a bargaining chip in negotiations with hotel worker unions in Anaheim and Orlando.

Our Los Angeles wage dispute attorneys know that fighting for a living wage is only half the battle. Once minimum wage is set, it is essential to ensure employers are adhering to the wage and hour obligations. That is where the skill and knowledge of our trusted legal team come into play. We know unions and workers fought hard to earn the wages they need to live their lives. It is our job to protect those wages. If you suspect your employer is not meeting wage obligations or is in violation of other relevant labor laws, our employment lawyers will use our extensive experience to determine your rights and the best way to move forward.