The recent case of James Damore has raised serious issues about politics and free speech in the workplace. Damore was a Google engineer who circulated a highly controversial “anti-diversity manifesto” among his co-workers. Among other things, the manifesto claimed that the gender gap in the technology field was due to biological gender differences which made women less suited for the work. When the manifesto became public and went viral online, Google fired Damore for violating its Code of Conduct. CNBC reports that Damore compared being a conservative at Google to being gay in the 1950s. He claims he was fired for “wrong think,” and that anyone with conservative viewpoints is marginalized at Google. Google CEO Sundar Pinchai, in advising Google employees of Damore’s dismissal, issued a statement saying that,“To suggest a group of our colleagues have traits that make them less biologically suited to that work is offensive and not OK. It is contrary to our basic values and our Code of Conduct.” 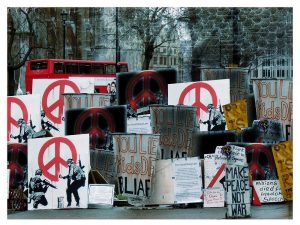 Politics are a particularly heated issue in current American culture. There is perhaps no point in history at which Americans have been more deeply and fundamentally divided over every possible ideological viewpoint. Foreign affairs, public policy, national security, religion, workplace equality, immigration, gender equality, and many other issues have caused physical violence to erupt between previously peaceful factions of society. How can employers maintain the peace of a healthy working environment while still respecting employee’s rights to their personal opinions?

The Legal Liability To Which Employers Subject Themselves

One of the most frustrating aspects of heated speech in the workplace is the liability which employers can face for either sanctioning or not sanctioning an employee. Wired reports that, in addition to his unfair labor practice complaint, Damore is also exploring “broader legal options” with his attorney. This includes the possibility of a class-action lawsuit involving other employees who claim they were fired by Google for expressing conservative viewpoints. Regardless of whether Damore is able to sustain a “political discrimination” lawsuit against Google, the accusation presents a publicity nightmare for the tech giant. It also puts the employer in an untenable position with respect to employee management: if it didn’t fire Damore, thousands of female employees could sue Google for subjecting them to a hostile work environment. Now that it has fired Damore, Google faces legal liability for political discrimination. How is a single employers supposed to reconcile these competing needs?

Like all business decisions, assessing liability is a cost-benefit analysis. Whether tacitly or implicitly, Google weighed the costs of firing Damore. While “political viewpoints” is not a protected employment class, gender is. Furthermore, subjecting employees to a hostile work environment is expressly prohibited by state sexual harassment laws. These facts make it apparent that Google would have faced greater liability by not firing Damore than it does it now does for dismissing him. Other employers facing similar conflicts must similarly weigh the costs and benefits of taking disciplinary actions against employees.

Heated speech in the workplace can expose employers to liability from terminated employees, or from employees who are subjected to a hostile work environment created by the speech. This can be a difficult line for an employer to successfully walk, but they have a responsibility to do so. Consult with an experienced California employment law attorney if you have been wrongfully terminated.