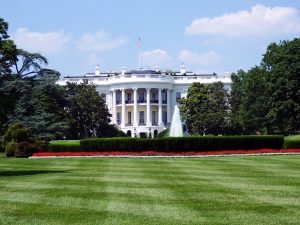 The U.S. Equal Opportunity Commission (EEOC) expressly indicates the phrase, “Go back to where you came from,” as an utterance that could be used as evidence (potentially strong evidence) of race-based discrimination in employment. This is illegal in the context of employment law.

The EEOC points out on its website that ethnic slurs and/or other verbal/physical conduct on the basis of one’s nationality are against the law if they are:

The EEOC goes on to list several examples of epithets, taunts and insults, ranging from mocking a person’s accent to remarks such as “Go back to where you came from.”‘

Such comments are characterized as a type of workplace harassment on the basis of one’s national origin. It may also be interpreted as condemnation for one’s ethnic, religious or religious identity as well.

However, it’s worth noting this is not necessarily an apples-to-apples comparison, as the president is not the employer of the Congresswomen against whom the verbal attack was launched. Rather, they belong to two parts of three separate but equal branches of government. The House did vote on a resolution to formally condemn the president’s words.

Democratic members of Congress have been vocal in their condemnation of the president’s use of a similar phrase. Sen. Tim Kaine, D-VA (Hillary Clinton’s 2016 running mate) called the word’s “bigoted.”

For the first time in more than 100 years, the U.S. House of Representatives voted to formally rebuke a sitting U.S. president, finding he had increased and legitimized hatred and fear of new Americans as well as people of color living among us.

It should be noted that each of the Congresswomen is a U.S. citizen, and all but one were born in the U.S. The fourth was born in Somolia, came to the U.S. as a child and is now a naturalized citizen. Also naturalized citizens are Trump’s wife and First Lady, Melania, as well as his first wife, Ivanna, and paternal grandparents, from Germany. (His maternal grandparents are from Scotland and did not emigrate.)

Federal Law Says ‘Go Back To Where You Came From’ Counts As Discrimination, July 15, 2019, By Sanjana Karanth, The Huffington Post