A hospital is asking the California Supreme Court to dismiss an employment lawsuit filed by a travel nurse who has already settled with the agency that directly hired her. The court’s decision in Grande v. Eisenhower will have potential implications for the hundreds of thousands of California workers employed by staffing agencies. 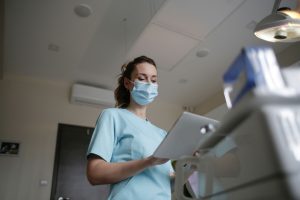 There are an estimated 1.7 million traveling nurses employed in the U.S., a figure that’s grown substantially in recent years given how much more registered nurses and other health care professionals can make when they work with these agencies.

Our Orange County employment lawyers know the question here will be whether travel nurses – and others who work contract positions through agencies – will have grounds to take legal action against both the agency and the company where they worked.

According to court records, plaintiff worked for the agency at a hospital she said denied her required meal and rest breaks earned, wages for certain time frames when she worked, and overtime wages. She was a plaintiff in a class action lawsuit against the travel agency that assigned employees to hospitals throughout the state of California. The traveling nurse agency ultimately settled with the class – including this nurse. She received $162, as well as a class representative incentive bonus of $20,000. When the settlement was signed, she executed a release of all claims against the agency.

About a year later, plaintiff filed a second class action lawsuit – based on the same labor law violations – except this time, the defendant was the hospital where she worked. The hospital had not been a party to the previous lawsuit. The staffing agency intervened in the case, and insisted plaintiff could not bring a separate lawsuit against the hospital because all claims relating to this conduct had been settled with them in the previous class action.

The trial court ruled in turn limited questions as to the propriety of the lawsuit, and found that the hospital wasn’t released as a party under the previous settlement agreement nor was it in privity with the agency, and thus could not avail itself of the doctrine of res judicata (the principle that a case of action can’t be litigated more than once if it’s already been judged on its merits).

Attorneys for the hospital filed a writ of mandate and the staffing agency appealed. The California Court of Appeals in a 2-1 decision affirmed the trial court and denied the petitions of the two companies.

Now the question is before the California Supreme Court.

According to the agreement the staffing agency and hospital had, nurses were to be considered employees of the agency, not paid by the hospital. That agreement was to give the agency exclusive and total legal responsibility as the nurses’ employer – including (but not limited to) ensuring full compliance with and satisfaction of all state and federal payroll, income and unemployment tax requirements, state and federal wage requirements, workers’ compensation insurance requirements, overtime, premium pay, and benefits and all other applicable state and federal laws arising from the workers’ actual work. The agency was also responsible for screening candidates and ensuring they met the minimum standards for placement in certain positions throughout the state.

That might seem to settle the issue as far as worker control, but it was actually the hospital that maintained control of the nurses during the performance of their jobs. It was the hospital that assessed the nurses’ competency during orientation programs. It was the hospital that required nurses to take its own clinical skills and medication courses. It also held onto discretion about which nurses would be retained for assignments and which would be terminated. Nurses were also required to abide by all hospital procedures and policies. The hospital paid the staffing agency based on how many hours the nurse’s worked, and the staffing agency in turn paid the nurses – who were required to use the hospital’s time and attendance system.

The hourly rate the hospital paid to the agency was $70/hour for registered nurses, with an additional $20 tacked on for every hour they worked over 12 hours in a day. (The agency in turn paid the nurses less than that, though they did also receive a weekly housing and meals per diem, so long as they worked at least 48 hours in a week.)

Flashforward to the class action lawsuit settlement against the agency. That agreement indicated that class members effectively forfeit any future claims against “released parties.” The agency and the hospital insist the hospital is a “released party.” An attorney for the plaintiffs indicated potential liability in the case against the agency was well over $10 million, but because they wouldn’t have been able to pay that sum, they settled for $750,000. Plaintiff attorneys say it was never their intention to release the hospital from that agreement. The agency disagrees, saying the it agreed to settle with the intention of the hospital also being released from future liability.

So far, both courts have sided with the plaintiffs/travel nurses. The California Supreme Court will have the final say.