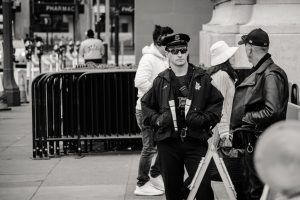 Although the law doesn’t bar “simple teasing,” isolated incidents of minimal seriousness and offhand comments, it’s illegal when it’s so severe or frequent that it creates an offensive and hostile work environment OR when the result is an adverse employment action, such as demotion or termination.

As noted by the U.S. Department of Justice, gender inequality has long been and remains a serious problem in law enforcement, where still only a small percentage of women serve in uniform. They are particularly rare at the upper echelons of organizations, with many declining to even pursue such roles for fear of backlash or oppression by male colleagues.

Our Los Angeles gender discrimination lawyers are committed to helping those victimized in these incidents obtain justice.

California Gender Discrimination Went On For Years at Police Department

The chief repeatedly reported sexist treatment and gender-based discrimination to city council members as well as the city manager, all of whom allegedly dismissed her concerns when she first filed the complaints roughly five years before her termination. She asserted the department promoted her to the chief position as a means of celebrating its diversity for political sake, using her as “a prop” to brag about inclusion when in fact, the culture at the department was anything but inclusive.

Not only was she subjected to years of gender-based harassment (encouraged, she says, by a police captain who felt himself more deserving of the post she held) she was also paid far less than the male appointed as her predecessor (the captain whom she alleged was at the heart of the harassment) after her departure – earning $60,000 more a year in salary and benefits, despite holding the same position with the same duties.

The multi-million-dollar settlement concludes what was a drawn-out legal battle between the former chief and the city. Numerous claims had been dismissed from the original filing in 2014 before it was refiled the following year.

Plaintiff alleged she was more than qualified for the position, having earned numerous commendations in her 14 years with the department, including an Outstanding Service Award and Employee of the year. She began her career in the early 1980s with another local police department, initially being one of just two women on the force.

She was reportedly mocked specifically and relentlessly because of her ethnicity (Peruvian) as well as her gender. Some insinuated she was part of the mafia in Latin America. Some officers referred to her as “that woman” and said they would refuse to obey her orders. Insubordination by the captain, she says, was consistent, and he frequently encouraged other members to treat her with flagrant disrespect and harassment. When she removed him from the chain of command, another high-ranking officer called her after midnight, yelling and cursing and demanding she reverse the move or he’d have her fired. City council later blocked that ranking officer’s effort to have her fired. That officer was later given a public reprimand from council.

When the chief met with the mayor regarding her concerns and ongoing harassment, the mayor reportedly conceded the captain was difficult to work with, but insisted he was “like a brother” and thus “is not going anywhere.”

Later, however, when the other ranking officer’s friend was appointed to council, he again pushed for the chief’s dismissal – a move that was successful. The gender discrimination lawsuit notes the mayor released a public statement on her firing indicating she was removed “without cause.”

The city has released a statement saying it was disappointed in the verdict, though it’s not clear whether an appeal will follow.