California workplace discrimination can be broadly explained as a job candidate or employee is treated unfavorably due to their age (if over 40), disability, genetic information, national origin, ethnicity, pregnancy, religion, race or skin color, or sex. Federal law make it illegal for employers to retaliate against applicants or employees who assert their right to be free of employment discrimination. 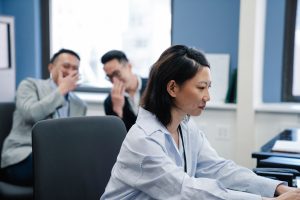 One of the primary sources of our federal workplace anti-discrimination laws is Title VII of the Civil Rights Act of 1964. This statutes makes it unlawful to discriminate during hiring, discharge, referral, promotion, termination, or any other aspect of employment on the basis of color, race, religion, sex, or national origin. Title VII is enforceable by the Equal Employment Opportunity Commission.

In 2020, the U.S. Supreme Court ruled that the Title VII banned workplace discrimination against LGBT employees on the basis of their sexual orientation. (Prior to that, protections for LGBT workers was only specified in certain states, California being one of them.) Furthermore, federal subcontractors are required to implement affirmative actions to ensure equal employment opportunities regardless of sex, sexual orientation, gender identity, national origin, race, color, or religion.

Sometimes the terms “harassment” and “discrimination” are used interchangeably in reference to employment law, but they are a little different. Harassment is a form of discrimination. Some discrimination is harassment, but there are other kinds as well.

Discrimination is when one suffers an adverse employment action due to membership in a protected class, which may include age, race, gender, national origin, etc. Harassment is a level of mistreatment based on one’s protected class to the point of creating a hostile work environment.

Examples of harassment at work include:

Proof of harassment does not require evidence of economic injury, discharge from employment, or even being the direct target of the behavior.

For example, if a man is fired – or never hired in the first place – because of his race, that is discrimination. However, if that same man is verbally abused at work, repeatedly called offensive names and made to feel unwelcome or unsafe, that is harassment. If the man went on to report the harassment and was fired as a result, this is known as retaliation.

In California, workplace discrimination can be based on a myriad of factors, including one’s age, gender, race, ethnicity, skin color, national origin, physical or mental disability, genetic information, pregnancy or parenthood, or relationship to someone who may be discriminated against.

Some examples of employment discrimination include:

If you have been discriminated against or harassed at work in Riverside or elsewhere in Southern California, our dedicated employment lawyers can help.