The U.S. Supreme Court recently heard arguments in a dispute over the California labor law that gives private attorneys the right to pursue litigation on behalf of workers (even if they agreed on their own to arbitrate) and to collect penalties on the state’s behalf for wage and hour violations. As our Riverside employment lawyers can explain, the case is being closely watched, as it is an important test of whether employers can shield themselves from employment lawsuits with arbitration clauses that prohibit group or class action lawsuits. 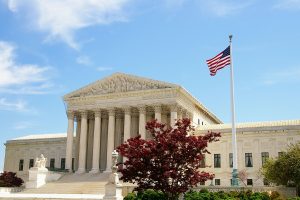 During oral arguments, the court’s conservative justices spoke very little, while the liberal justices were more vocal in their defense of the state labor law.

The Private Attorneys General Act was passed in 2004 and allows private attorneys in California to sue employers and collect penalties for violations of the state’s labor code. The underlying reason for the act? Rampant labor law violations, particularly in the following industries:

The state simply doesn’t have enough staff to adequately police these industries. PAGA lawsuits are often complaints of unpaid overtime work or wage theft. The law allows 75 percent of penalties collected to go to the state. The remainder goes to the affected employees and attorneys.

Some California employers are arguing that the law has effectively become a means to enrich plaintiff attorneys. Penalties in these cases can exceed six figures or more.

What the court is being asked to decide is whether the Federal Arbitration Act of 1925 preempts – or supersedes – the state’s PAGA law. The federal statute was originally passed to uphold arbitration agreements between companies that had signed contracts to ship goods overseas or by railroad. More recently, though, it’s been used as a means of protecting companies from class action lawsuits. Since the early 2010s, the U.S. Supreme Court has fairly routinely sided with businesses favoring arbitration, finding businesses can enforce arbitration clauses to stop both consumers and employees from pursuing broad class action claims.

But as our Riverside employment attorneys know, California has been the one firm holdout, continuing to give plaintiffs the ability to join their legal actions against a company under state law.

In the matter currently before the SCOTUS, plaintiff worked as a sales agent for a cruise company. After she quit her job, she allegedly did not receive her last paycheck from the company. She soon learned she wasn’t alone in having this problem with the company, and thereafter became the lead plaintiff in a private employment lawsuit on behalf of dozens of employees for the company. The cruise company asked a judge in Los Angeles to toss the lawsuit and compel her to resolve the matter in arbitration, as the former employee had signed an agreement indicating she’d arbitrate any dispute that arose out of employment. That agreement also contained a clause wherein she waived her potential right to engage in a class action lawsuit or a claim under PAGA. However, both the trial court judge and later an appellate court sided with the worker, finding that the state law allowed the private lawsuits because, in effect, the state was the real party pursuing the claim. The California Supreme Court declined to hear the appeal – which would have allowed the lower court’s ruling to stand, except the SCOTUS accepted a request from the employer to hear its appeal.

Attorneys for the company argued that arbitration will effectively be gutted if states are allowed to green light these type of broad, private lawsuits. On the other side of the aisle, though, advocates for workers’ rights say private lawsuits are critical to protecting employees. One statistic, generated by the UCLA Labor Center analysis, found that nearly 9 in 10 PAGA claims involve wage theft.

The SCOTUS decision is expected to be handed down in June.