A judge in Sacramento has halted a California employment law bolstering fast food worker protections that was slated to go into effect Jan. 1, 2023. 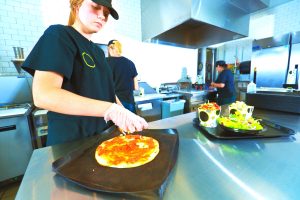 The judge’s decision, issued Dec. 30, 2023, was in response to a lawsuit filed by a large restaurant coalition and corporate trade groups seeking to overturn the law, Assembly Bill 257 (aka the FAST Act or Fast Food Recovery Act). The industry group, Save Local Restaurants (which includes half a dozen other large franchise, restaurant, and business associations), submitted a petition signed by 1 million+ California voters to take the issue back to the ballot in November 2024.

Precedent set decades ago with the right of referendum many presuming that the announcement of the petition itself would trigger the state to put a hold on implementing pending legislation as previously planned. However, as our Los Angeles employment lawyers can explain, the state Department of Industrial Regulations said it intended to proceed as planned with AB 257 – and would pause only if the petition signatures were verified and the referendum was approved, a process that typically takes several weeks. To qualify for referendum, 66 percent of the signatures would need to be verified. The process is still ongoing, but as of this writing, the verification rate is about 76 percent.

Restaurant group attorneys blasted the state for continuing in the meantime, saying that since the right of referendum was set about 100 years ago, more than 50 of those made it onto the ballot, and 50 percent of those ended up being repealed by voters. This is the first time, they said, that state government insisted on temporarily enforcing a statute while the signature review process was taking place.

The court ruling in Sacramento imposed an injunction on the state that blocks implementation of AB 257 – at least until it’s determined whether there are enough verified signatures to move forward with the referendum.

Why Is the California Fast Food Worker Rights Law So Contentious?

This legislation was championed by employee service unions and worker rights advocates, who argued the estimated 550,000 fast-food workers in California (many women and people of color) are especially vulnerable to health, safety, wage, and fair treatment violations – in part because they are low-paid, easily replaceable, and lack better employment alternatives. As we cited in an earlier Los Angeles employment law blog, fast food worker in California on average earn $3 less hourly compared to workers in similar sectors in the state. They’re also at higher risk for involuntary part-time schedules and employment rights abuses.

Federal law requires that fast-food workers be paid minimum wage and overtime. Minors working at fast-food restaurants are limited in the amount of hours they can work in a given day or week.

The new law would have laid the ground rules for more stringent rules for health safety, increased wages to $22/hourly (up from $15/hourly) and another 3.5 percent each year after that, and increased penalties for work rights violations. It also would have set up a 10-member council of industry stakeholders – including workers – who would be responsible for setting the standards and addressing industry-wide issues.

Opponents are fierce in their objection to these measures, saying that to increase wages to $22/hourly would mean a 60 percent increase in labor costs for businesses – forcing most all to raise their prices, some to decrease their staff, and others to close entirely. Smaller businesses and franchise owners would likely be disproportionately impacted.

The age increase is arguably the most contentious part of the bill. Jumping from $15/hourly to $22/annually is a 47 percent increase, but consider that from 2021 to 2022, the average fair-market rent for a two-bedroom apartment in California increased by 49 percent – now at $2,274/month. A full-time fast-food worker earning $15/hourly makes $2,400/month – and that’s before taxes. It’s not a living wage in California.

The court’s temporary injunction will be weighed on January 13th, at which point the court will decide if the state can continue its A.B. 257 implementation plans or if it should wait until the verification process is complete. The state has until Jan. 25th to finish conducting its random sample for verification. If the signatures are verified (which so far they seem on track to be), the FAST Act will be on pause until at least the November 2024 election.

Have you been impacted by an employment rights violation? Contact the employment attorneys at Nassiri Law Group, practicing in Newport Beach, Riverside and Los Angeles. Call 714-937-2020.